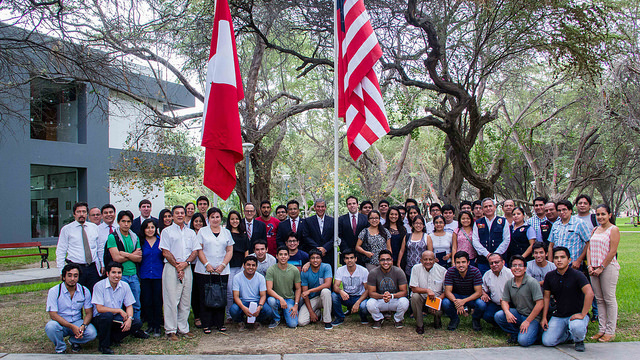 During the winter of 1998, rain poured relentlessly for weeks on the Piura River. The river flooded, and water swept through riverside homes and into the city streets. Dozens of bridges were destroyed. Many people were displaced, and many had to be rescued. Lakes sprang up in the desert, and in other places where the water pooled, malaria thrived due to the increase of mosquitos.

The 1997-8 El Niño was the strongest on record, but it was also the first time that climate scientists were able to predict abnormal flooding and droughts months in advance – and that preparation saved lives. With the memory of the hardship and destruction wrought by El Niño in northern Peru, the city of Piura has determinedly continued improving Piura’s disaster preparedness ahead of El Niño to better mitigate the impacts of the current El Niño weather pattern.

“OpenSteetMap is the satellite computer application that the population can utilize to report on areas vulnerable to El Niño” and help to provide early evacuation warnings ahead of any disaster, described the regional governor, Reynaldo Hilbck, after discussing the MapGive and Secondary Cities initiatives with the U.S. Embassy South American REO office. When current population estimates are not available, the number of buildings can be used to estimate the size of a population at risk. A more complete road network can improve evacuation planning. Improving the basemap of an area, and especially creating new data where none exists, can help communities develop an assessment of risk from flooding and other climate related hazards.

MapGive, together with the U.S. Embassy in Lima and Universidad de Piura (UDEP), with technical assistance from MapBox Ayacucho, organized the Piura MapGive Workshop to train over fifty students and professionals in a suite of OpenStreetMap (OSM) based skills and tools designed to empower participants with the capability to map Piura comprehensively.

The Governor of Piura and UDEP’s Rector showed support and kicked off the workshop that included a mapathon, community engagement exercise, and, of course, hands on training. Participants included civil engineering majors at UDEP and disaster management professionals from Peru’s INDECI, the agency in Peru that is in charge of disaster preparedness and response. Participants were trained in desktop editing in OpenStreetMap and the use of OSM data in GIS and MapBox Studio, and braved the heat for two days to gain practical experience using OpenMapKit and FieldPapers, two OSM-based field data collection platforms (or tools). The open map data created in just one short weekend can be used for various types of analysis and visualization and can continue to be improved as the OSM community in Peru grows stronger.

MapGive and our partners will continue to grow and linkup open mapping communities in places like Cusco, Lima, Ayacucho, and Piura in Peru, and other OpenStreetMap communities in South America and around the world.