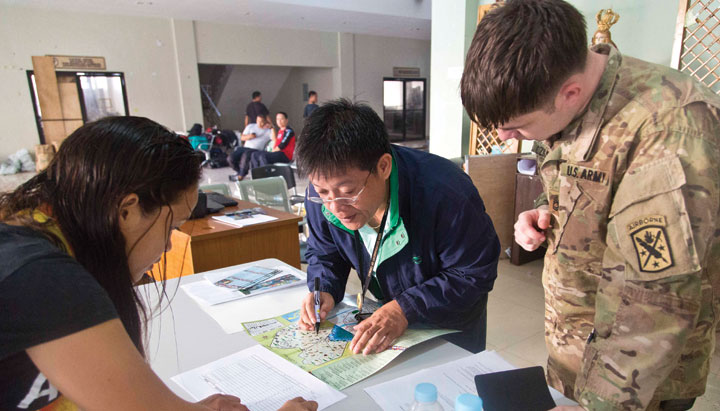 In November 2013, the Humanitarian OpenSteetMap Team (HOT) started activating volunteer mappers even before super typhoon Haiyan made landfall in the Philippines to gather a baseline of geographic data.

Some 1600 volunteers quickly added approximately 4.5 million edits to the base map. This information provided critical data for assessing damage to infrastructure, getting people to evacuation centers and hospitals and routing emergency relief supplies. Crisis Camps around the world rallied volunteers to pitch in to mapping efforts. Journalist Tyler Machado reported on his experience at a Crisis Camp in Vermont.

It was one week after Super Typhoon Haiyan, and I was on a global team of volunteers performing emergency mapping work in uncharted areas of the island of Negros in the Philippines. My task was to mark the footprints of buildings — or where buildings had been before the storm blew through and destroyed them. Our team split up, each of us taking a block of about two square miles.

I wasn’t actually on the ground in the Philippines. I was on my laptop at Office Squared in Burlington. About 20 of my fellow volunteers shared that room; hundreds more were spread out all over the world. The crowd in Burlington included geographic-information-system professionals but also students, local techies and others with no cartographic experience.

Our job as volunteers was simple: Use a web-based mapmaking tool called OpenStreetMap to trace elements of satellite photos of areas of the Philippines damaged by the typhoon and save them to the map database. We traced roads and rivers and outlined building footprints — indicating with more notes in the metadata when the building appeared to have been reduced to a pile of rubble.

OpenStreetMap is the web-based mapping software of choice for do-gooder cartographers: Imagine the functionality of Google Maps combined with the anyone-can-edit freedom of Wikipedia. It’s an entirely open-source project, and — unlike most online or hard-copy maps — the data are free to all regardless of intended use.

My maps weren’t set in stone: OpenStreetMap editors can check other users’ work and make adjustments if need be. More experienced users can make those edits official in the database.

It’s easy to take extensive geographic information for granted in the developed world. But in the rural areas of the Philippines where Haiyan hit hardest, relief workers often lack maps with comprehensive detail. “My guess is that many of the primary and secondary roads were available,” Hegman said. “But the tertiary roads and the trails and the building locations? No way. That’s something the disaster assistance [workers] would have never had.”

Of course, the mere act of plotting roads on maps doesn’t help storm-stricken Filipinos to recovery. The crisis mapping of globally distributed volunteers is useful because it guides the relief work that’s happening on the ground. The OpenStreetMap software encourages this use; a viewer can see the maps in “humanitarian mode,” which displays road and building damage as marked by editors.

I’ve already lost track of which sections of the map I edited — the HOT site, OpenStreetMap Tasking Manager, now assigns me a new task when I visit it. But, as long as there are paths through the sugar-cane fields and mountains of the Philippines, there’s more work to be done — and I hope what’s been done so far has made the relief efforts more useful to the people who live there.