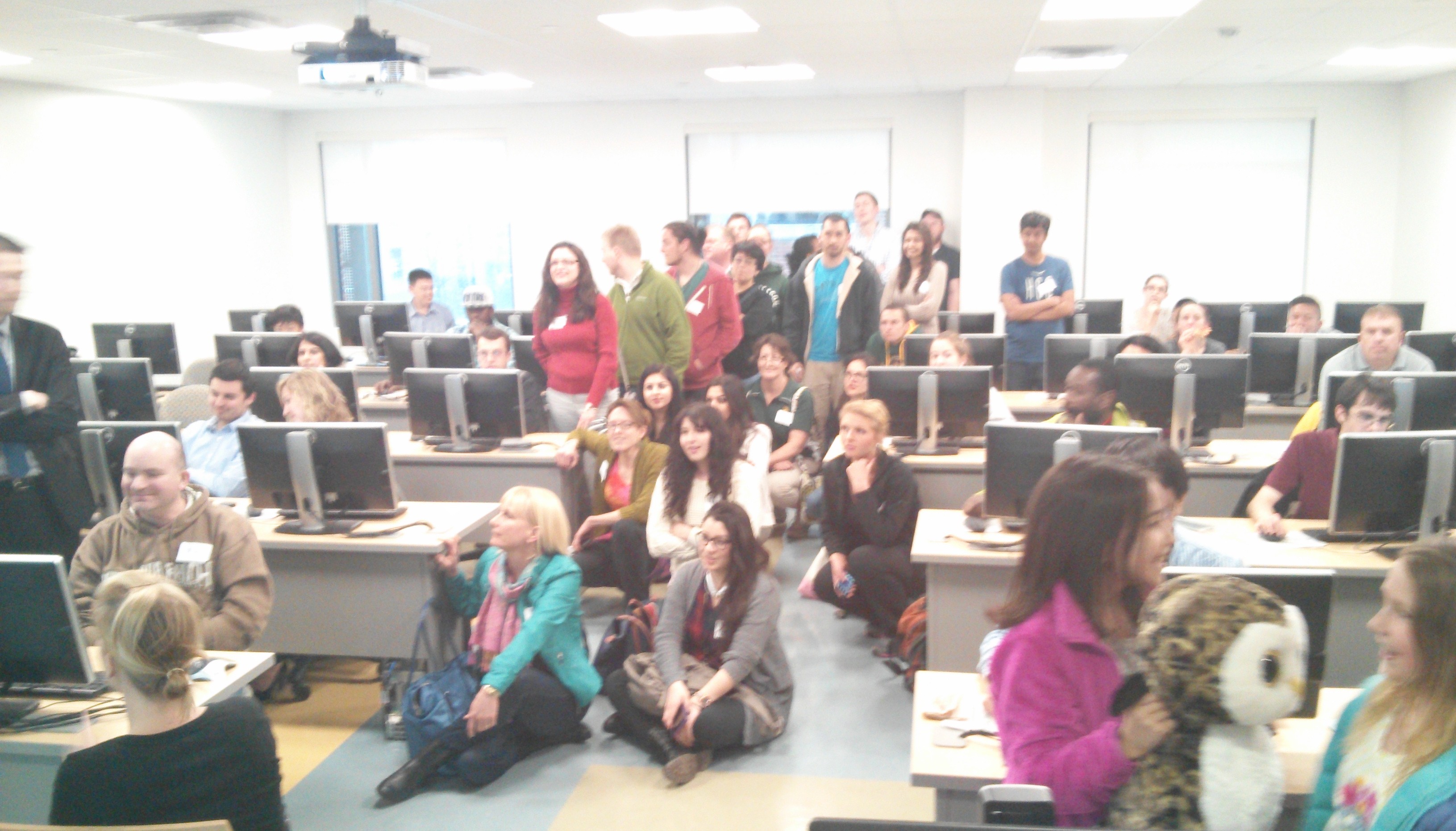 Competition heated up as George Mason University (GMU) and George Washington University (GWU) went head-to-head at the MapOff held on Friday March 27, 2015. Hosted by George Mason University’s Department of Geography and Geoinformation Science and George Washington University’s Department of Geography, the event was supported by MapGive, the USAID Office of Foreign Disaster Assistance (OFDA) and USAID GeoCenter, and Missing Maps. There was a great turnout with more than 220 mappers in attendance!

Students from George Washington University, collaborated with students from Texas Tech and mapped areas in Khulna, Bangladesh that were focused on agricultural development, as part of a school project focused on OpenStreetMap. The data will be checked for quality and used for planning development activities by USAID for their Feed the Future program.

Over at GMU, the event was a hit for beginners, filling up three computer labs reserved for beginner mappers. Several attendees were first time mappers, taking their initial steps by exploring the tools and making use of provided satellite imagery services. A separate room was reserved for more experienced mappers, allowing them to really take off.

Music helped get people in the groove and pizza and refreshments were provided by USGIF. You know that when mappers were too engrossed in their task to break for food, they were really enjoying their work.

The MapOff event page was set up to highlight the occasion and associated projects. Each project page was linked to a tracing guide, as well as to the Humanitarian OpenStreetMap Team’s Tasking Manager. In addition, before and after maps for each project allowed for progress visualization. The tracing guides were developed in collaboration between MapGive, Missing Maps, and USAID in the weeks leading up to the event.

Using the metrics calculated in near real-time, World Atlases donated by National Geographic were awarded to the top 2 mappers. 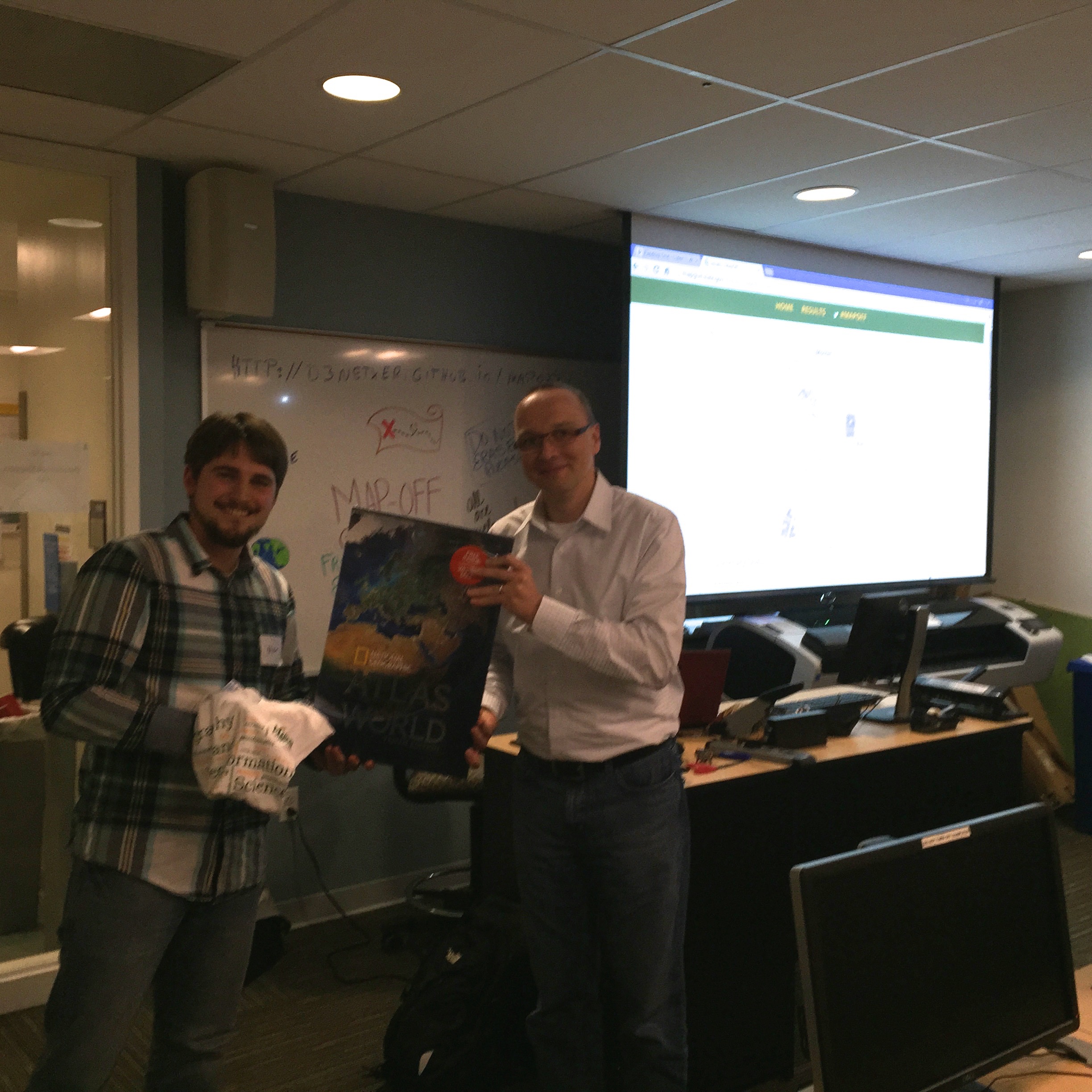 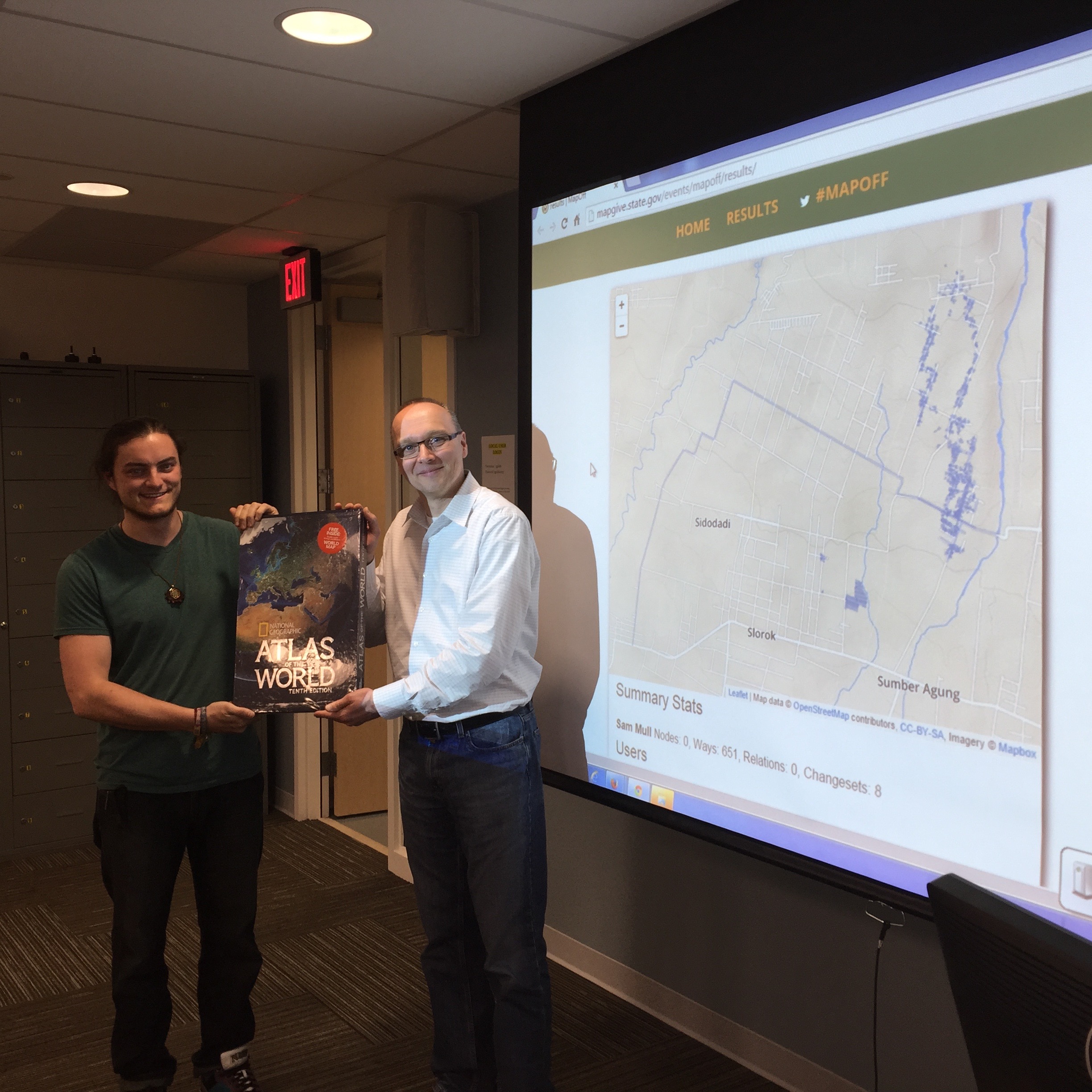 Top mappers of the night accept their prizes, in front of a visual of all of their edits to the map.

Mike Resig, who was awarded the 1st place prize for the night, had this to say about the event:

“Thank you for hosting the Map-Off Map-a-thon! It was a great chance for a lot of people to contribute towards a good cause, and I look forward to next time. The MapGive staff facilitated an encouraging and friendly competition between numerous universities nationwide to promote mapping efforts. MapGive's Map-a-thon events are perfect outreach opportunities for beginners and experienced professionals alike to volunteer and provide priceless support for worldwide situations.”


Since the conclusion of the event, organizations have been heavily focusing on follow-up and feedback. MapGive is utilizing Virtual Student Foreign Service e-interns to validate squares for Rivercess, Liberia. OFDA has been working hard on validation in Karangetang and has shared building and road data with the U.S. Volcano Disaster Assistance Program. There was plenty of work left to do for the two larger MapOff mapping projects in Canaan and Kelud so MapGive connected with various schools to host mapathons for Earth Observation Day. In addition, various planners held an After Action Review, a two-hour discussion covering topics like: technology, mapping, and communications. Several new ideas were introduced on how to improve future events and increase collaboration. We cannot wait for the next event!

-Sven Fuhrmann, Associate Professor in Geography and Geoinformation Science (GGS), helped organize the event at GMU. Sam Cooke was an important contributor by creating flyers and graphics, promoting the event, and handling logistics. Big thanks to Anthony Stefanidis and the GGS department for their support.

-NOVA ASPRS and GMU ASPRS clubs: Too many people to thank! Many people were very supportive and contributed to planning, volunteering at the event, and training new mappers.

-OFDA: David Saeger and Keifer Gonzalez were responsible for preparing the two volcano projects (Karangetang and Kelud). They created the tracing guides and trained new mappers at the event.

-USAID GeoCenter: Chad Blevins and the rest of GeoCenter. We are always grateful to have them as a partner.

-GWU: Richard Hinton and Nuala Cowan, professors at GWU who have taken the lead in integrating OSM in Higher Education. Early on in the planning for having a Mapathon at GMU, we found out they were planning a Mapathon the very same day. Fortunately, we were able to come together and make this into a much bigger event.

-Texas Tech: Glad to see they had a successful event and look forward to having them as a future partner!

-Robert Soden (OSM-history) and Development Seed (osm-meta-util); without their open source software our metrics would not have been possible.

-Missing Maps: Instrumental in planning the Mapathon and providing one of the featured projects. -USGIF for supporting the event at GMU with food and drinks