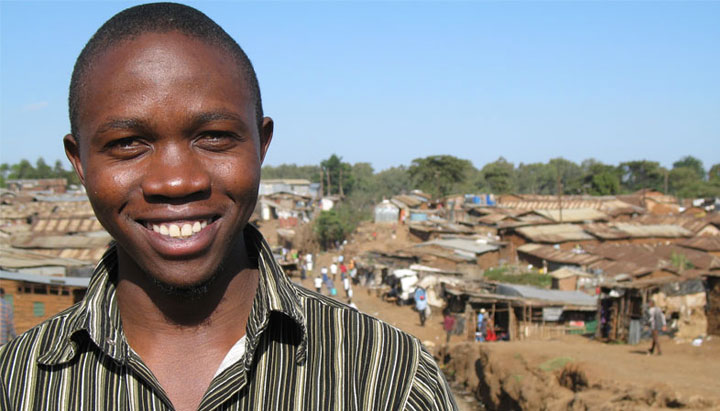 Kepha Ngito grew up in Kenya in a neighborhood of Nairobi called Kibera, where hundreds of thousands live in poverty. “I grew up in that time when we didn’t have a physical address. My house was never numbered. It wasn’t existent; it was not on the map.” Ngito’s father worked in a factory to pay his tuition through high school. Education gave Ngito the option to leave Kibera. Instead, he stayed and became a community activist, starting Map Kibera Trust, a non-profit that uses OpenStreetMap technology. Maps provide hard data to justify allocation of resources. He says no maps equals no data and therefore no political power. “For many years Kibera was not on the map despite the fact that hundreds of thousands of people live there. It means they were not quantified as people.”

Ngito says the creation of the first digital map of Kibera was a great achievement, “because suddenly for the first time people discovered that it was not just a forest, it was people… Not just a bunch of poor people [but] consumers that could buy products; it was stakeholders and people who were willing to give ideas to develop their communities.”

He adds that community members, especially young people, are empowered by learning to map. They gain technical skills and the ability to shape a brighter future for their own community.

Life in Kibera and adjacent slums continues to improve. Beyond simply mapping the streets and houses of Kibera, thematic maps focus on security, education, health and water sanitation.

Overall, Ngito observes a renewed spirit of advocacy and ongoing improvements. “People have rights and privileges here which is [usually] lacking in the slums.” He adds, “The mapping is just the first phase. The most important thing is what the map does. These maps are not going to belong to us as experts; they are going to belong to the community.”